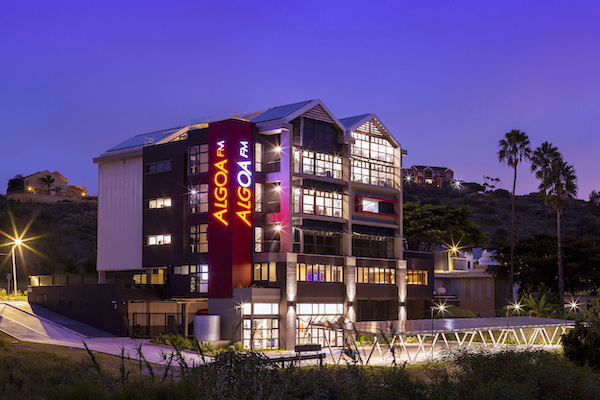 Nelson Mandela Bay’s newest green building has saved an estimated 40 000 kg of CO2 emissions in the past 12 months, according to Algoa FM managing director Alfie Jay.

This saving in fossil fuel emissions is thanks to the iconic Algoa FM headquarters in the Baakens Valley being designed with sustainability in mind, by incorporating solar panels to minimise power use.

It is the first building in Nelson Mandela Bay to have “shade-type” solar panels, screening the windows on the north face of the building.

These 41 solar panels together with the 188 solar panels on the roof have been supplemented with the first solar carport structure in the metro to be built using an aluminium cantilever frame, according to Jay.

“We now generate up to 115 kW of clean power, which supplies between 35% and 45% of our needs in the five-storey media house. With the addition of 97 panels on the carport we will reduce our carbon footprint even further,” he says.

The clean power also feeds one of the first electric vehicle chargers in the metro.

Excess electricity is fed into the Nelson Mandela Bay grid over weekends.

Technology being used to reduce power consumption in the building include the fitting of LED lights throughout, which are controlled by 40 motion sensors in low-traffic areas.

Intelligent variable speed air conditioners adapt to the conditions and can be set independently for different offices, which impact positively on power consumption.

Special insulation in the roof helps to keep the temperature constant.

In addition, there are no hot water geysers in the kitchens or bathrooms – they are fitted with units which heat up water when it is required.

Water consumption has been reduced by using captured rainwater and condensation from the air conditioning units to flush all of the toilets in the building.

The outside of the building is lit by solar street lights and the landscaping utilises spekboom, which acts as a carbon sponge.

“As a leading corporate citizen, we take our responsibility very seriously and to this end, ensured that around 90 per cent of all costs related to the building were spent with local companies – with special emphasis on our small business neighbours in the Baakens River Valley, says Jay. “We are clearly pleased that this multi-million-rand investment has had a positive impact on the local economy,” says Jay.

There are also ongoing benefits – one of the reasons for selecting the site was to contribute positively towards the revitalisation of the Baakens River Valley, with a view to transforming it into a unique tourism attraction, which will further benefit the economy.

“There are few cities in the world bisected by a valley with the rich biodiversity of the Baakens River, with its more than 100 bird species; 24 reptile and seven frog species; as well as 24 mammal species.

“It is a true privilege to look out of these windows and see the start of the 23 kilometres of trails up the river and continuing deep into Algoa country.

“It is a natural heritage that all of us as a metro need to conserve,” says Jay.

From laid-back lounges to bustling traffic; from tiny corner shops to majestic malls – OFM resounds across ...

“Mother’s Day is not really a day during which I focus on my role as a mum, but rather on that of my role a...

By: Dave Tiltmann Just like radio, podcasting is an intimate medium that has the power to create connection...

Nelson Mandela Bay’s newest green building has saved an estimated 40 000 kg of CO2 emissions in the past 12...

The Middelburg (Cape) Recreation Club has received R46 000 worth of sports equipment for a variety of disci...